How to Deal With Hate on Social Media: Don't Feed the Trolls

If you have spent any amount of time on social media, you'll have heard of trolls.

Trolls are accounts that deliberately start arguments by posting provocative and often offensive statements. They may also target and harass individuals. The intention of trolls is to stir up to stir up misinformation and hate through deliberate tactics.

The standard advice for anyone who is being trolled is to ignore the abuse. That's easier said than done, of course. This new paper, Don't Feed the Trolls: How to Deal With Hate on Social Media created by the Center for Countering Digital Hate explains why ignoring the trolls is so important.

Social media operates via algorithms. That means the more engagement a tweet or Facebook post receives, the algorithm sees it's really popular so shows it on more people's feeds. The algorithms don't differentiate between posts that are helpful and constructive, and those full of misinformation.

This animation shows how social media algorithms work. When spreading misinformation, trolls take advantage of confirmation bias (well they think that too, so it must be true!).

As the paper says, "Propagandists know that all you have to do to spread a conspiracy theory is to get more people to hear it." Twitter, with its 280 character limit, presents particular challenges when debating an issue or presenting a counter-argument, especially when the issue is a complex one. That means if you're attempting to debate with or counter a troll, you're inadvertently amplifying their message, and helping to stoke the fire.

As tempting as it might feel to challenge the troll, and as kind as it might seem to come to the defence of someone being targeted by a troll, the best strategy is to block and ignore the troll.

The paper linked to earlier in this post has clear points of advice for anyone being targeted by a troll:

It's important to understand the difference between genuine trolls and debate with those with whom you simply disagree.

How can we tell the difference between a troll and a genuine debate?

On Twitter before engaging or responding, take a moment to look at the account's biography. Does the description make them seem like a genuine person? Have a look at the tweets they've sent. Trolls will tend to have a timeline full of unpleasant tweets. Before responding to an article or news story on any social media platform, take a moment to check the source. Do a quick Google. Is it fact, or fake news?

The key is to pause and reflect before engaging or responding, especially if reading something that raises your hackles.

There can be lots of impassioned debate on social media, and in the majority of cases that's a positive thing. Social media has the potential to connect diverse and divergent communities, transcending traditional hierarchies. There is huge potential for us to learn from one another through the medium of social media through sharing our different experiences, and points of view.

If our social media feeds are full of people who think like us, we create an echo chamber (that would no doubt delight propagandist trolls!); we need a range of diverse views, we need a spectrum of allies. That range of views helps counteract the polarity the trolls seek to create.

Healthcare issues can be especially emotive. It doesn't mean we always have to agree: but it does mean we have to remember to be kind, respectful, and compassionate. Remember it's easy misunderstand and to be misunderstood, for a variety of reasons. Try to engage in respectful discourse, seeking to understand where the other person is coming from. And never tweet while angry!

The paper includes a bibilography; if you're interested in the topic, I can thoroughly recommend The Righteous Mind: Why Good People Are Divided by Politics and Religion by Jonathan Haidt, which explores why we think we're right and everyone else is wrong. The bibliography also refers to two books by Cass Sunstein which I haven't read; I've added them to my reading list. I'd add to the bibliography the excellent #Republic: Divided Democracy in the Age of Social Media, also by Sunstein, which describes how social media creates create echo chambers that help perpetuate polarity of opinion, and misinformation.

Troll propagandists know that when public figures engage with abusive trolls to defend their reputation or their values – a normal behavioural response – this inadvertently spreads and legitimates the trolls’ message and tricks social media algorithms into pushing it into a broader array of users’ timelines. 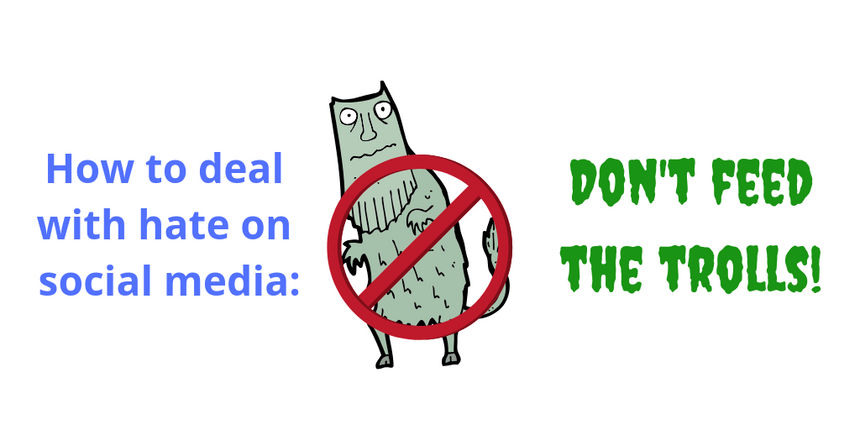 Today, we are publishing #DontFeedTheTrolls, our first report which provides a practical guide for what to do if you’re targeted by online trolls.

Grateful to @CCDHate and colleagues for this important contribution to making the public space online safer and less hateful. We all need to collaborate in efforts to stop spread of abuse online. Tools and behaviour change needed more than ever. #DontFeedTheTrolls #MoreInCommon pic.twitter.com/KLNGthByPC

Engaging with trolls is bad for society as it amplifies & spreads hate, and it’s bad to your own mental wellbeing. If you see someone engaging with trolls, please send them our guide so they can get informed on how to deal with hate. #DontFeedTheTrolls pic.twitter.com/S5agPdtkdq

To directly engage with trolls is to hand them a megaphone. The world would be a happier & less hateful place if, instead of giving these voices the attention & audience they crave, we all simply blocked & ignored them. I welcome @CCDHate #DontFeedTheTrolls launch today. pic.twitter.com/t55WtZMYBw

Great report out today from @CCDHate. Trolling is a sophisticated, targeted technique to maximise publicity and gain followers. There is literally a playbook these people follow. The way to ‘fight back’ could not be simpler. Stop feeding the trolls. More detail in the full report pic.twitter.com/uboPjA1YBr