This browser is not actively supported anymore. For the best passle experience, we strongly recommend you upgrade your browser.
All Posts Subscribe
September 4, 2019 | 8 minutes read 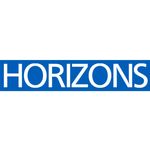 On 31st July 2019 Hugh McCaughey (@HughMcCaughey), National Improvement Director for the NHS in England led his third #Improve4Patients tweet chat. It was hosted by the NHS Horizons team (@HorizonsNHS) who also prepared this report.  The tweet chat lasted for one hour from 7pm to 8pm.

These were the questions asked during the tweet chat: 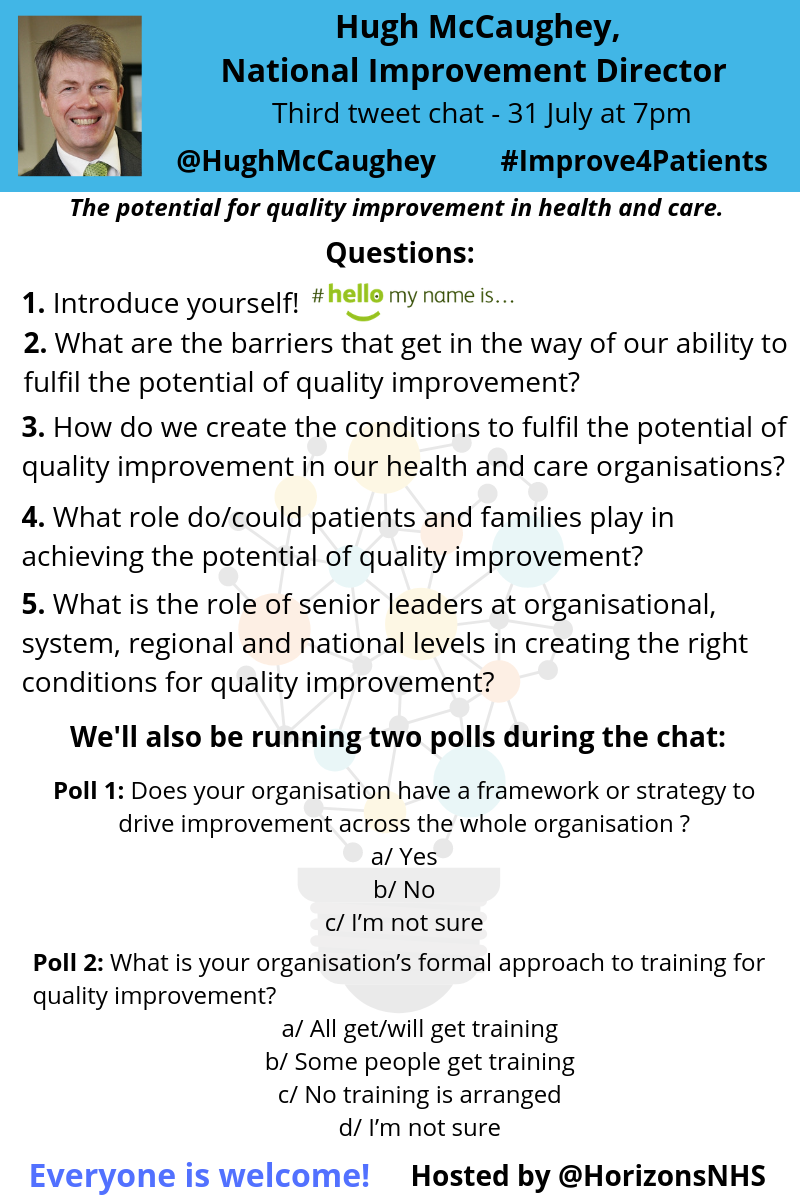 The statistics and themes

These are the tweet chat influencers as identified by the Symplur analytic platform: 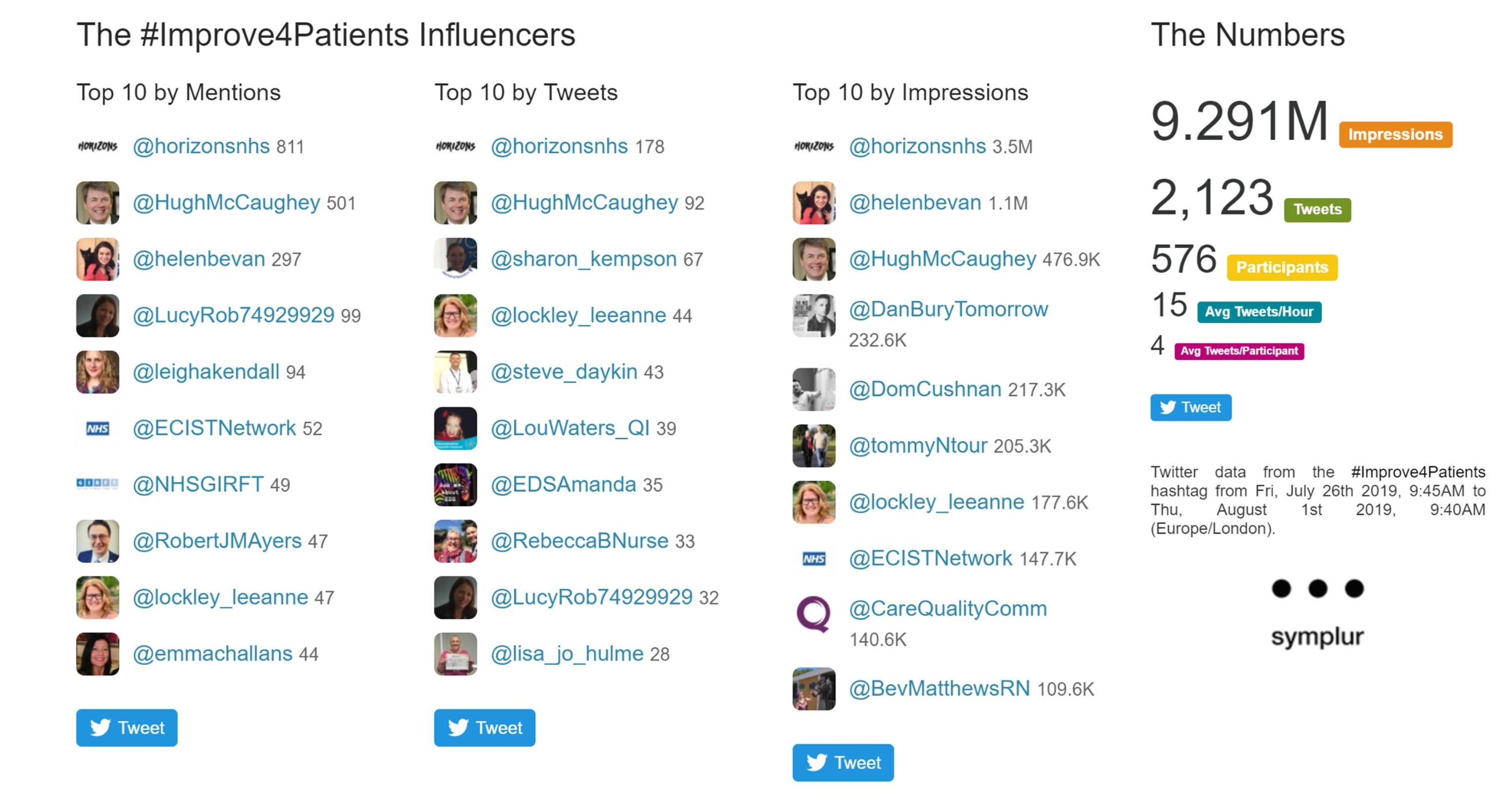 The NHS Horizons team analysed the 892 original tweets (excluding retweets) sent by 541 contributors (source: Symplur and TweetBinder). The tweets are grouped by question. The themes arising from each question are detailed below:

2. Key barriers to fulfiling the potential of quality improvement include:

3. Ways to create the conditions to fulfil the potential for quality improvement include:

4. The roles patients and families can and do play in achieving the potential of quality improvement include:

5. The role of senior leaders at organisational, system and national levels in creating the right conditions for quality improvement include:

The chat started with introductions; the first poll ran concurrently. The results of the poll, which asked whether participants' organisation has a framework or strategy to drive improvement across the whole organisation?

The results of the first poll are below: 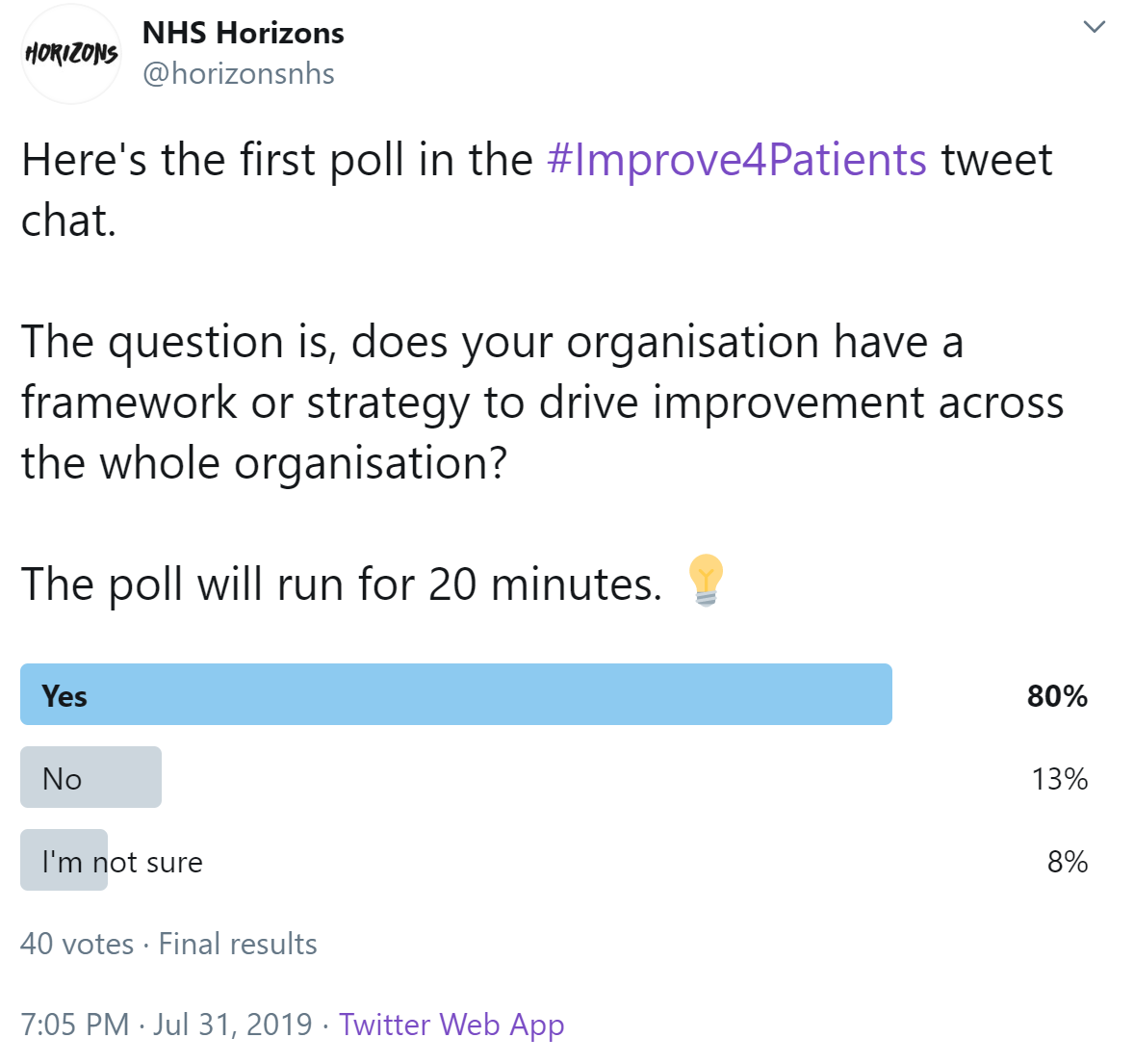 Question 2: What are the barriers that get in the way of our ability to fulfil the potential of quality improvement?

A host of barriers were identified by participants, including thinking that quality improvement is something that only some people do: 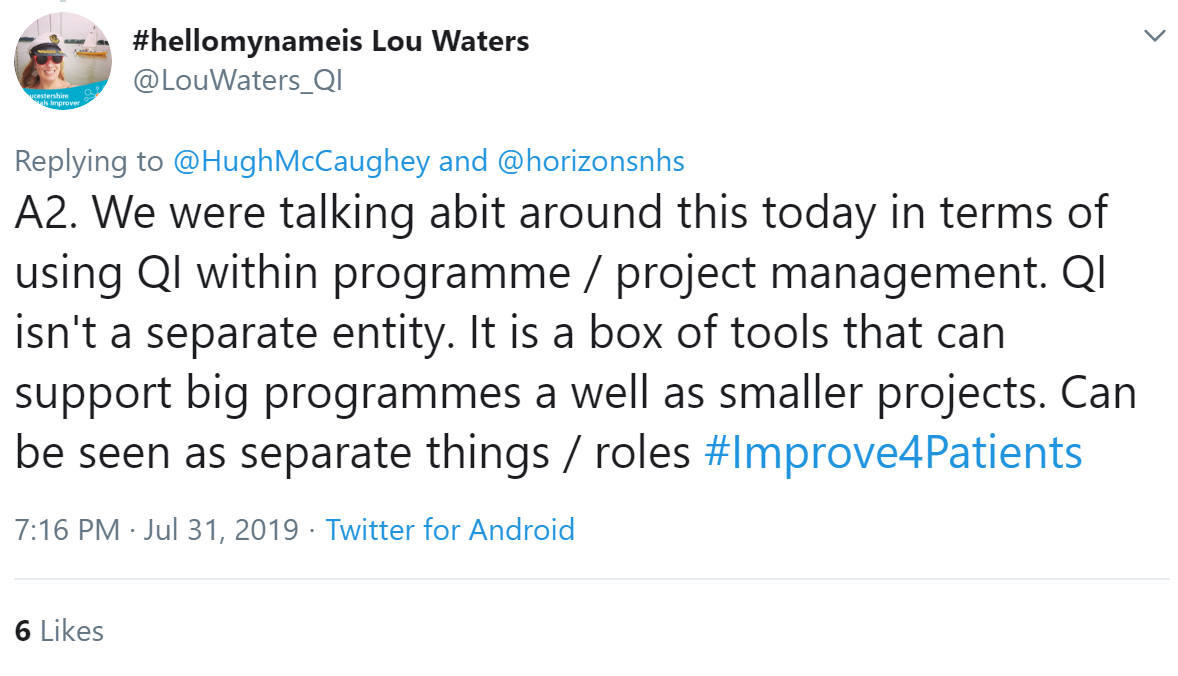 The way QI is communicated can create a barrier, thought Lynne Bowers; if the language isn't 'corporate' it may be deemed to be lacking in credibility.

Terminology and language can unintentionally exclude and reinforce the misconception that QI is the responsibility of the few, rather than us all: 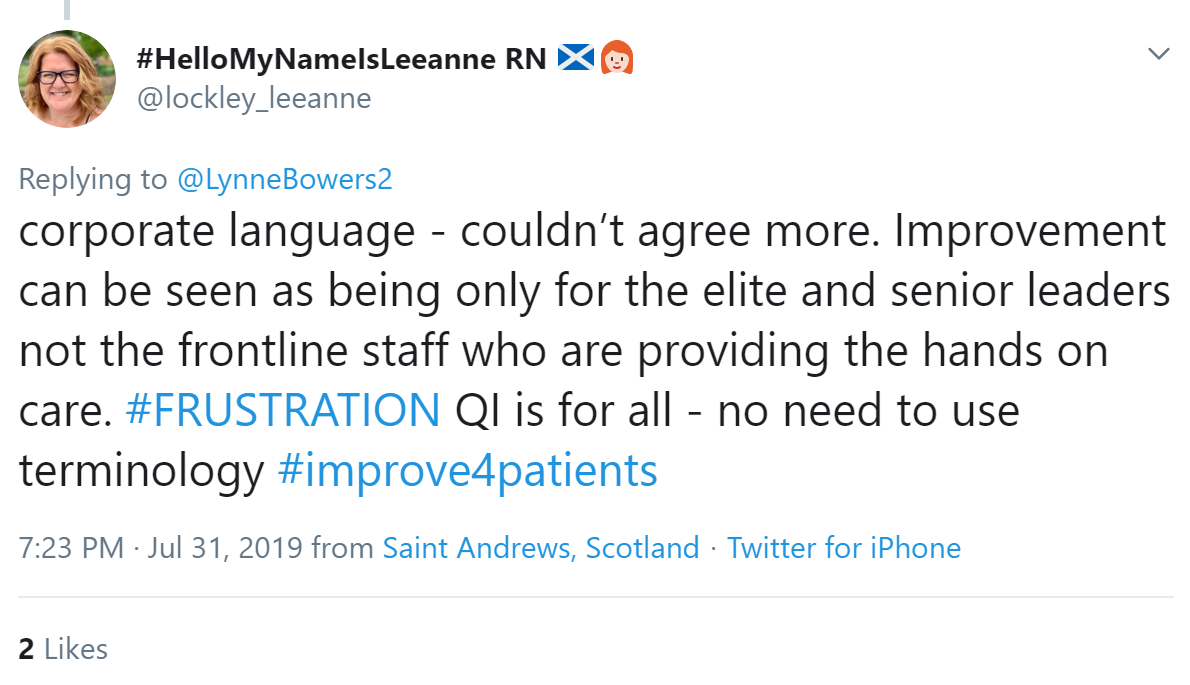 Steve reflected that a barrier is not really understanding what QI is in the first place: 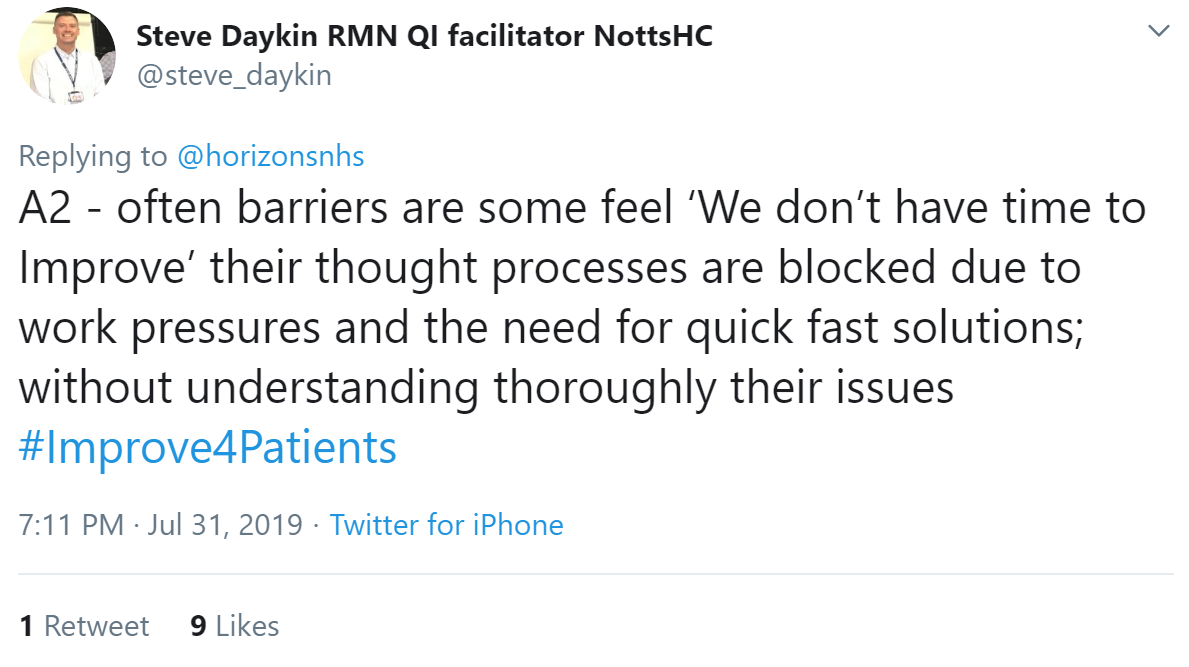 Part of understanding QI means understanding it takes time.  Vince Baxter reflected that we need to allow time for improvements to embed, rather than wanting quick wins; not allowing staff time for training or embedding the change provides an additional barrier. Hari echoed the sentiment. Lucy described how 'momentum fatigue' can get in the way of sustainability.

It's also about managing expectations, as Emma explained: 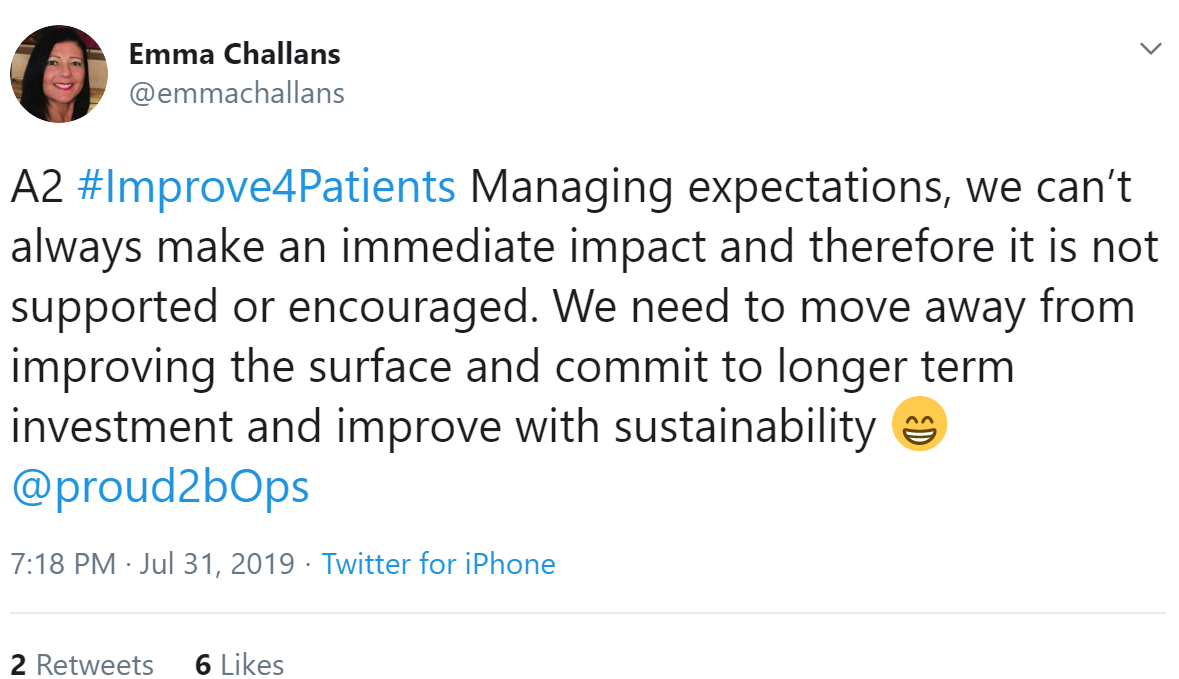 Execs receiving QI training can help address this barrier, thought Christopher Tuckett. Such training may also help the feeling of frustration from the number of hoops that have to be jumped through that Sam described.

Culture was a barrier mentioned by many. A key cultural point is those who don't want to change: "We've always done it this way" as Molly Kiltie said. This graphic shared by Lynnette Lee sums up the resistance to change: 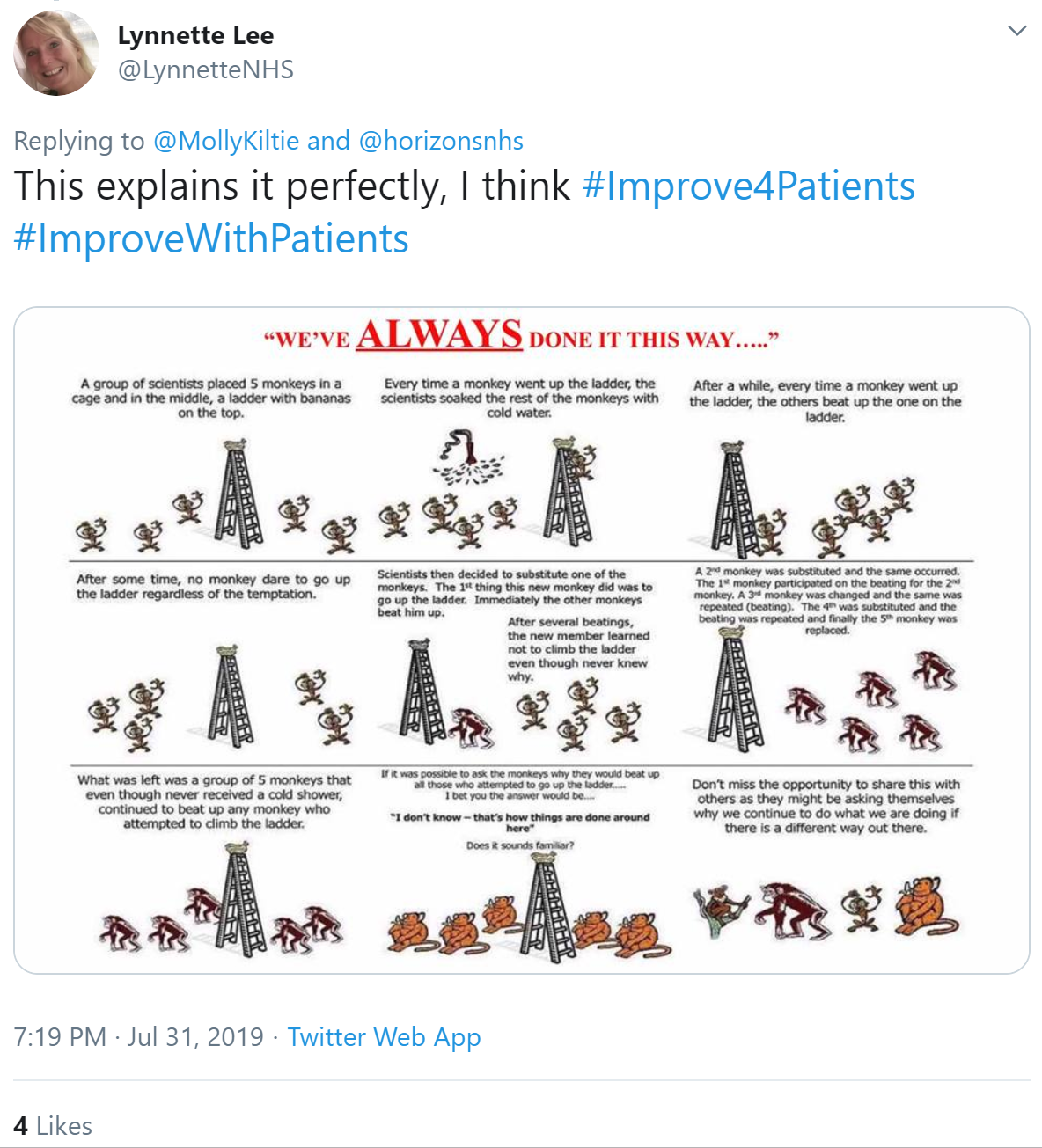 Lack of involvement isn't always due to a lack of enthusiasm, though. Staff can be busy with their key duties; those with a passion for improvment need opportunities to meet, as Karen explained: 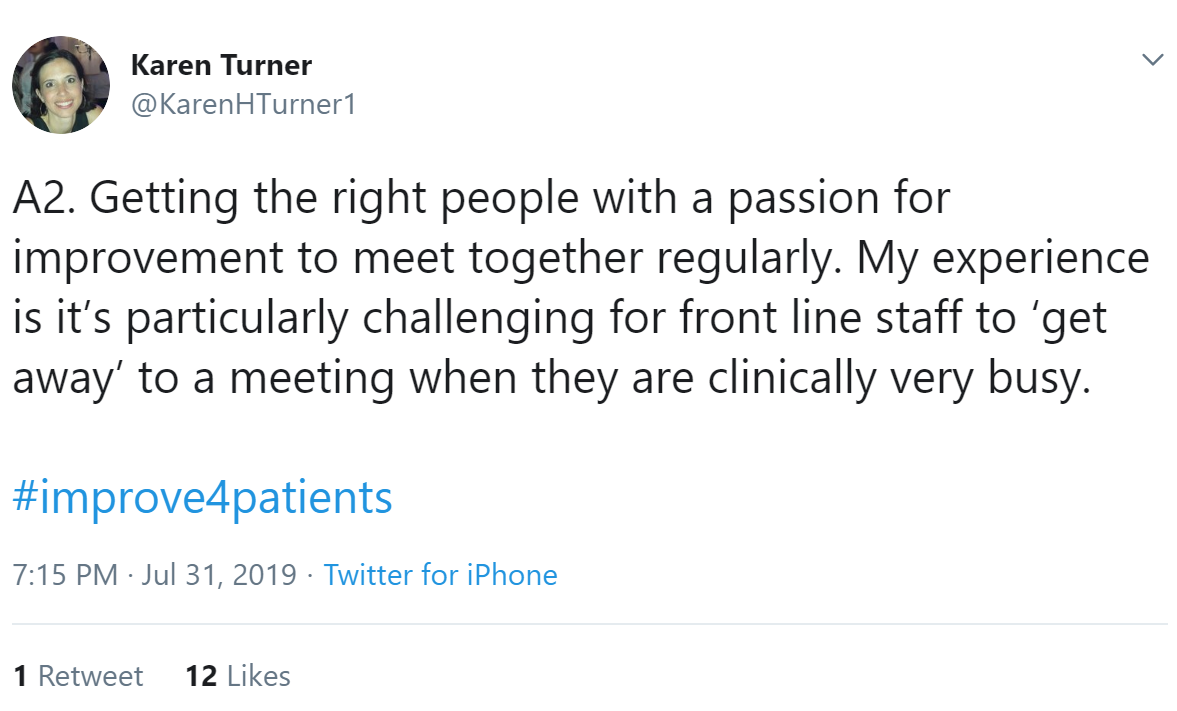 The second poll of the chat asked about participants' organisations' formal approach to training for quality improvement. 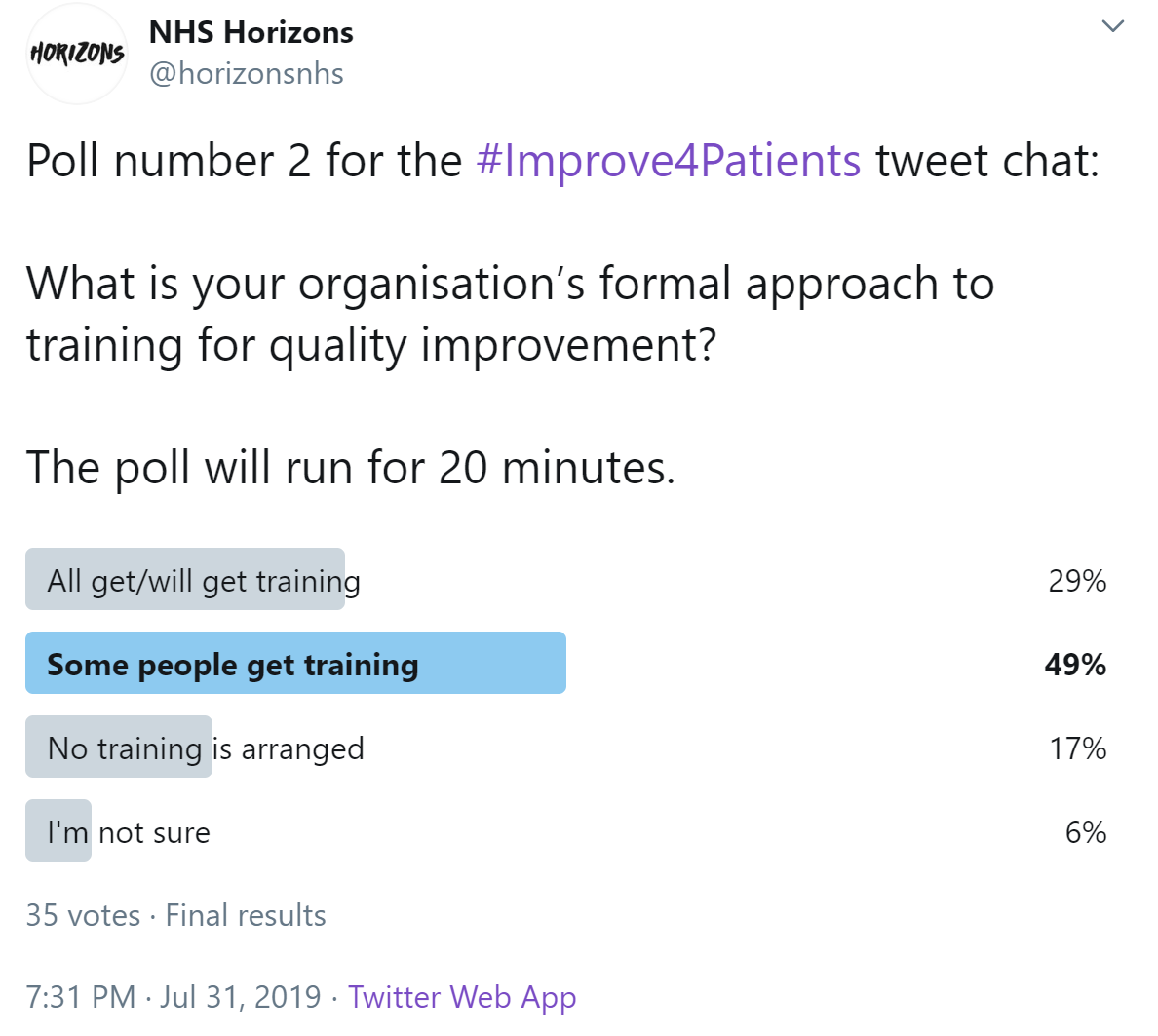 3. How do we create the conditions to fulfil the potential of quality improvement in health and care organisations?

As described in the 'barriers' section above, for QI to be truly successful we need to emphasise that it is everyone's job. As Sharon stated, everyone can be part of improvement:

Encouraging staff to lead improvement without waiting for permission entails creating a culture of psychological safety, as described by Sue Greenwood. Farzana Hussain also spoke about psychological safety; and that it is surprisingly hard to achieve.

Andy Jones summed it up well; we need a can-do culture, with staff having time to develop ideas. If the staff flourish, the NHS benefits!

Andrea expanded on that, adding keeping the focus on the benefit to patients from improvement efforts. 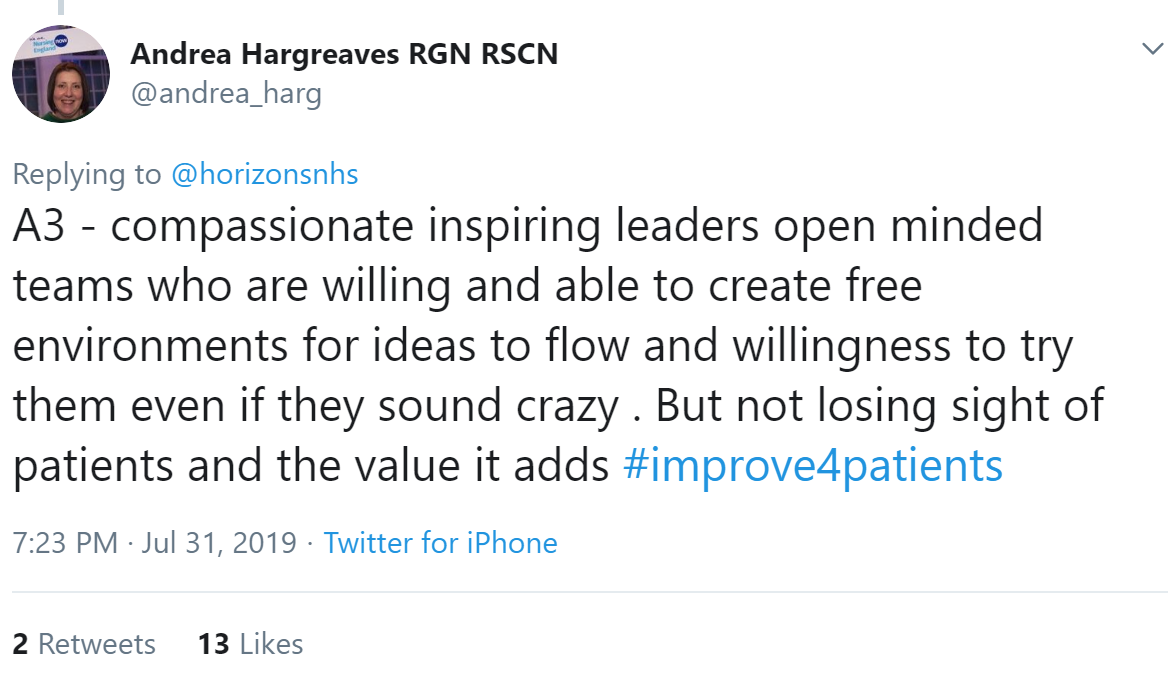 As Molly Kiltie said, creating conditions for improvement is about remembering why people join the NHS. Dann Gooding suggested clinical leaders need to listen and empower - and explain why QI ideas are needed, and how they will help improve patient care.

Communication was also raised by Kerry Cope; staff need to know they are being listened to. To feel valued, so that they can give the best care for patients. 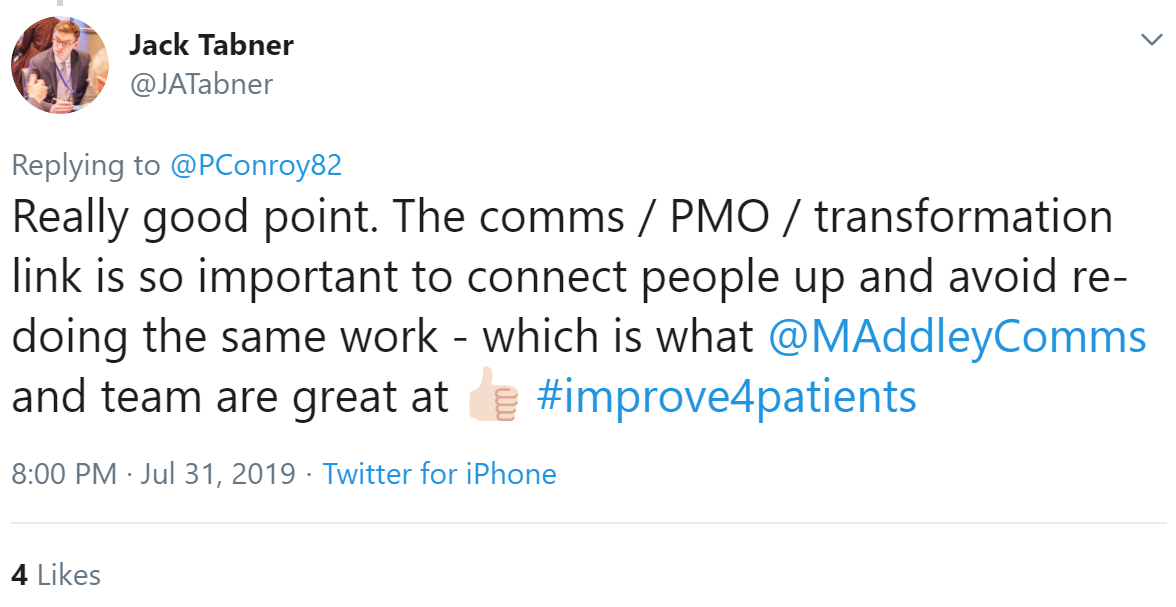 And because improvement is a team effort: we need to surround ourselves with people who encourage ideas and help build confidence, said Zoe Carciente. Rebecca Barrett agreed support from others is helpful.

4. What role do/could patients and families play in achieving the potential of quality improvement?

Marie Williams summed it up: 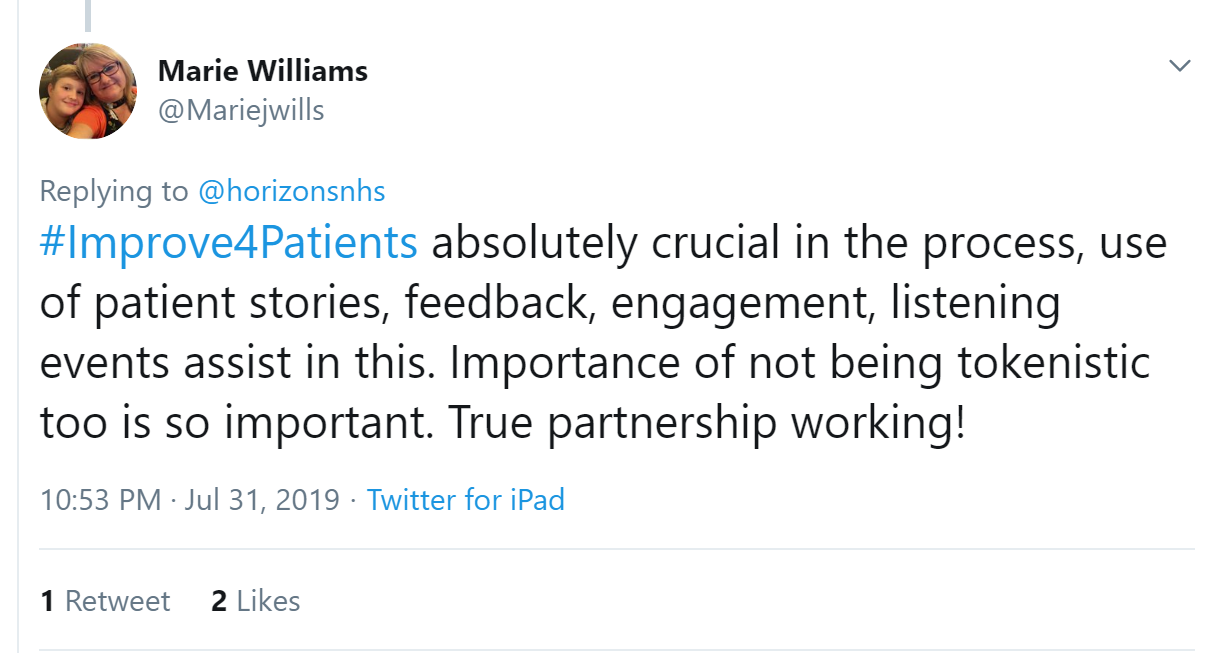 Karen Turner, a physiotherapist who is passionate about #WhatMattersToYou, believes that with the right mix of disciplines (clinical/non clinical) - grades, executive level champions and patient/family input, added to the right motivation and a meaningful aim (doing what matters for staff or patients)  leads to anything being possible. Farzana Hussain , a GP, agreed: 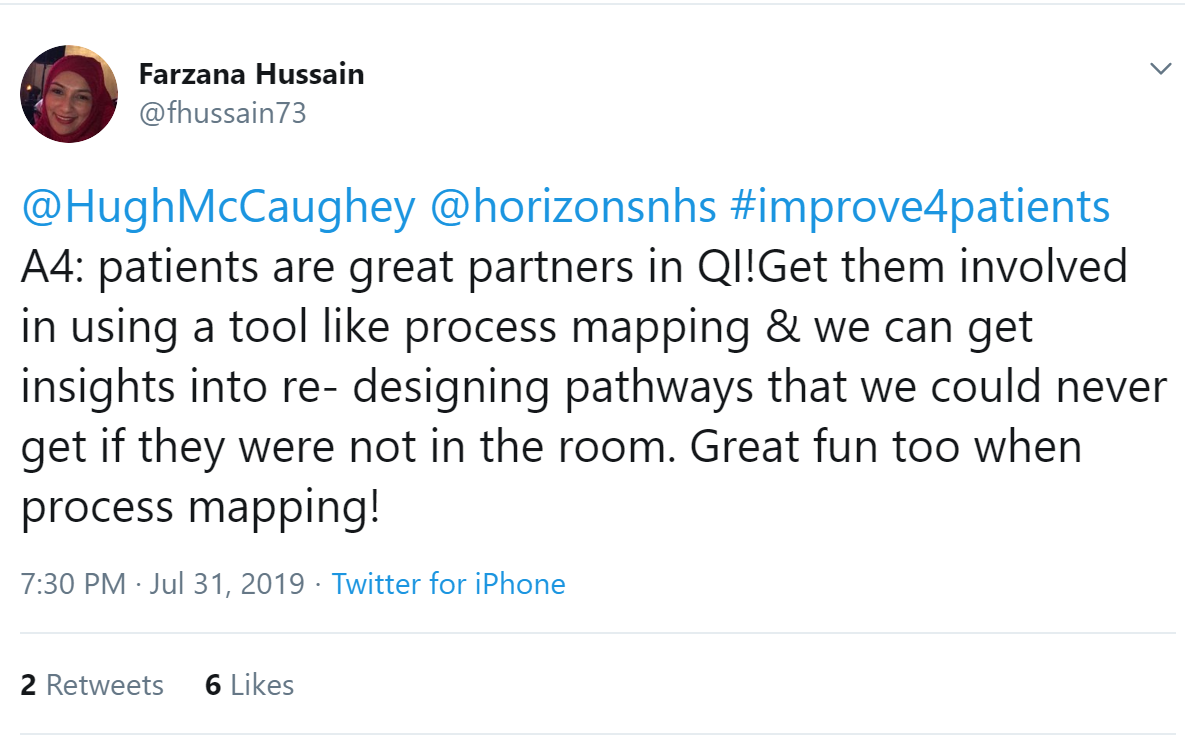 Lou Waters shared that Katie Parker is starting to introduce emotional process mapping across Gloucester Hospitals whilst Zoe Carciente added that we should be including patients and their families routinely, both interms of feedback and participation in forums whilst Kerry Cope highlighted discharge being a key point for a conversation.

Story telling was mentioned a number of times. Penny Pereira, deputy director @healthfdn and programme director for @theQCommunity shared that she will be working with National Voices to explore what more they can do to convene and support patient involvement in improvement. They will start by asking what’s already known and happening. 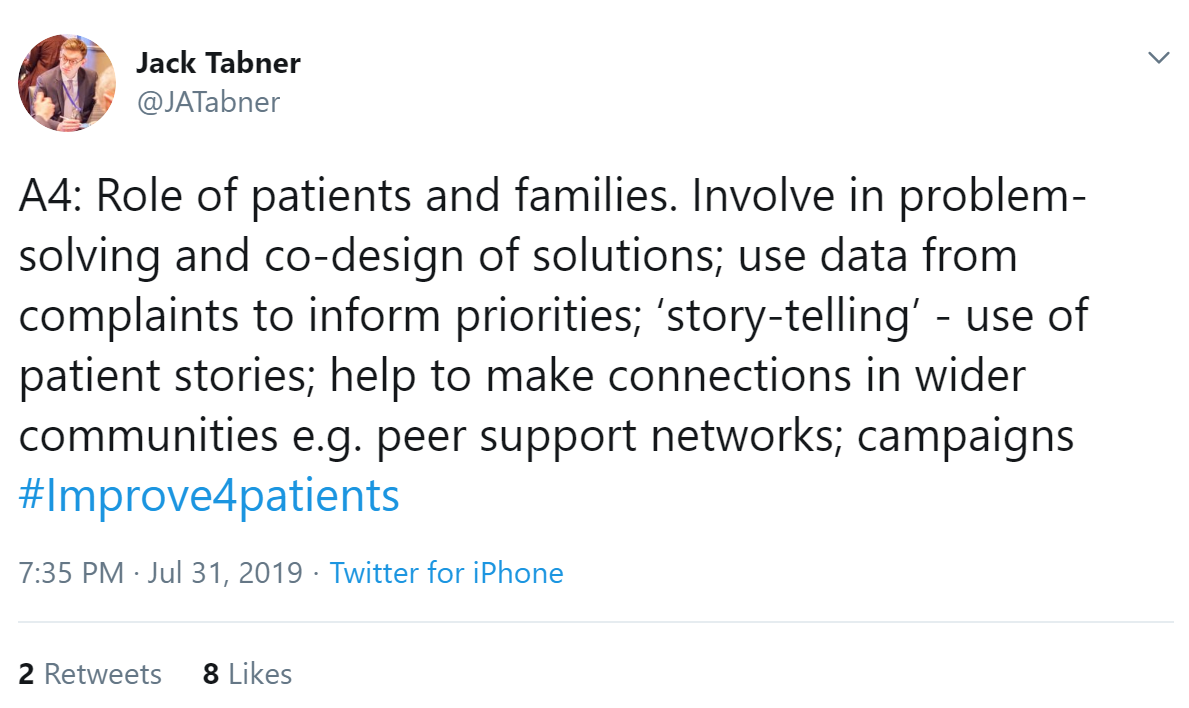 Inclusion is key - and will have a direct impact on patient experience so should be viewed as a "highly valued patient currency" says Rachael Brandreth. Lynne Bowers built on this.

Sam shared that many of the things patients and families ask for are simple, so their involvement need not be feared: 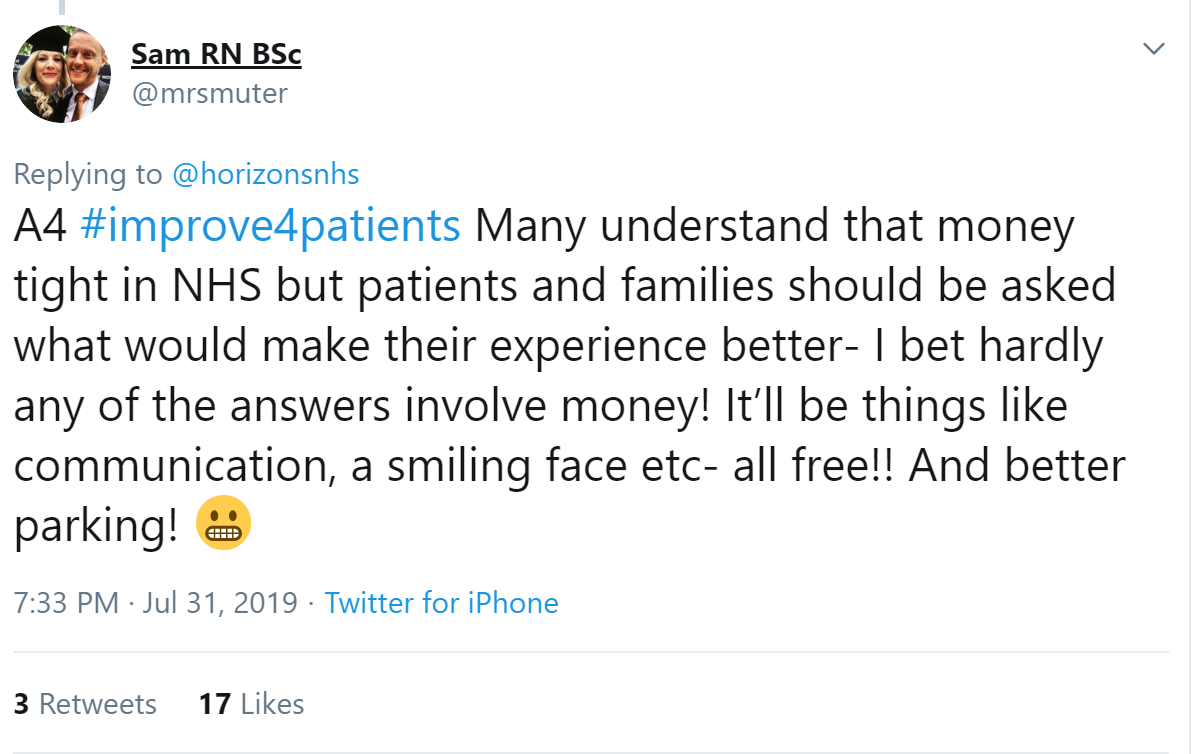 5. What is the role of senior leaders at organisational, system and national levels in creating the right conditions for quality improvement?

Lou Waters reflected that time must be invested at the beginning to make sure that the right conditions for quality improvement are achieved. 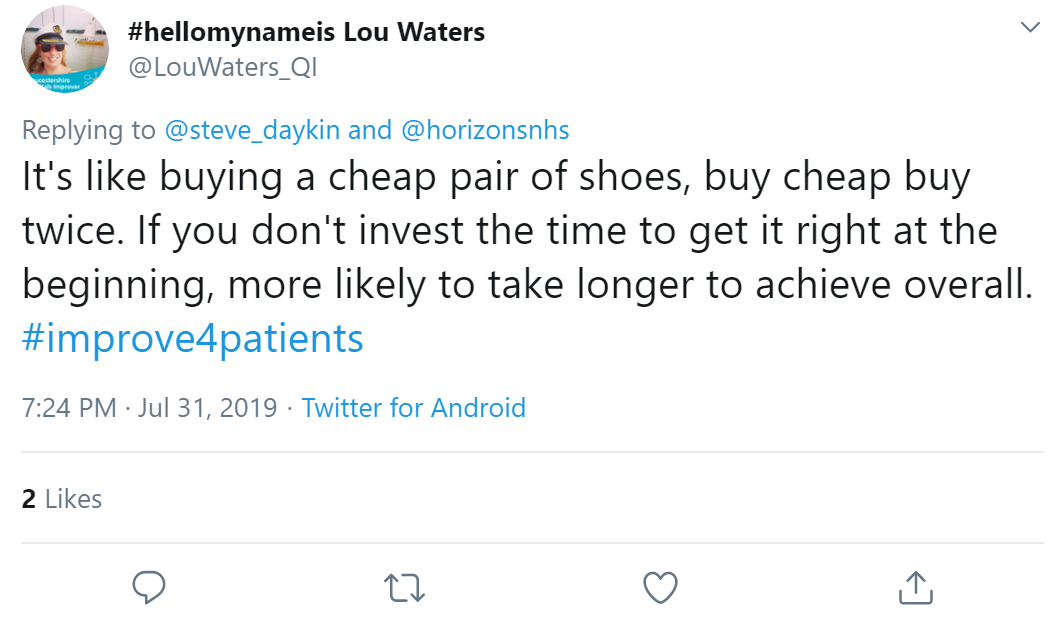 This was echoed by Lucy L who explained that there should be protected time, dedicated to giving participants the correct training and coaching. She also emphasised that successes needed to be celebrated often.

Farzana Hussain shared similar views, stating senior leaders can help those on the front line engage with QI by being positive about it; they can also share stories of successful projects which have made positive change for patients and staff.

An interesting point was raised by Steve Daykin, who suggested that senior leaders can sometimes be a barrier when it comes to quality improvement. 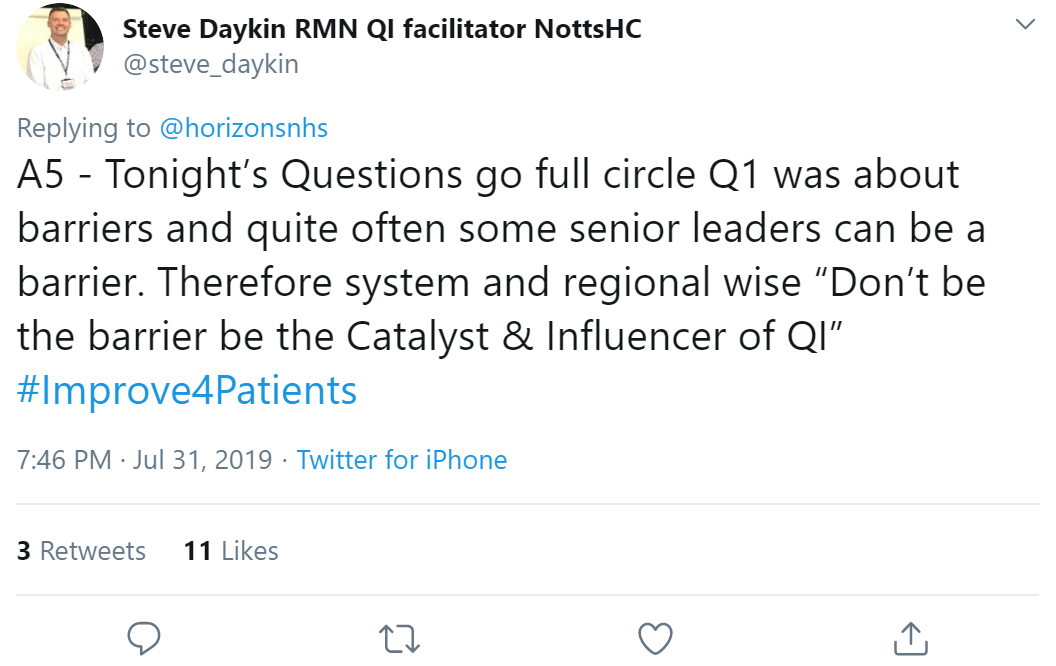 This was added to by Matthew Kalman Mezey who felt that leaders need to create cross-silo spaces where people are free to share ideas, find allies, test prototypes etc.

In response, Karen Johnson said a safe space would mean that we wouldn't always get the same faces in the room, giving the opportunity for a wider, more diverse search of ideas.

Karen Turner shared that the Royal Free London have exec sponsors for every project which offers expertise, wisdom and often a greater appreciation of the whole system. 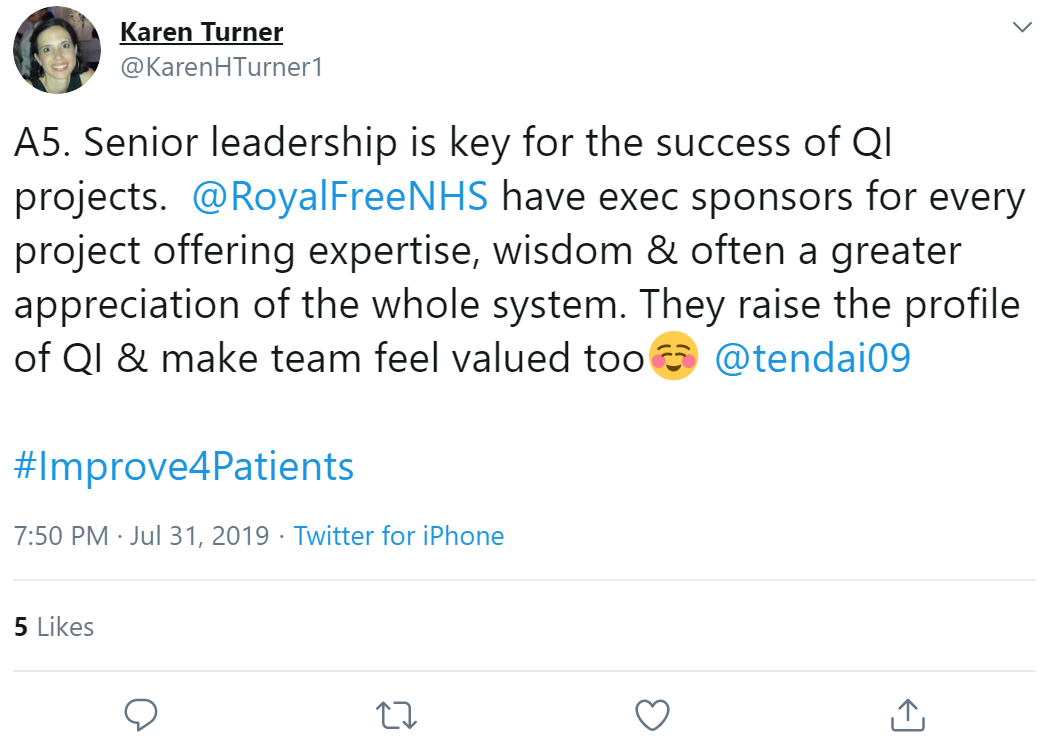 In addition, Carl Davies said the role of a leader is to support QI wholeheartedly and commit to the journey, not just to the destination. When it gets tough, not blaming, when things fall off the tracks lending a hand to pull it back on. This view was supported by Penny Pereira who added that the leader should be impatient to learn but patient for results.

Komal Bajaj shared that the best leaders that she has worked for have come with a clear purpose, and bring their whole self.  Yogangi Malhotra concurred, and added that these leaders would also be honest, even with their vulnerability; this was echoed by 15s30m

In addition, Lynne Winstanley expressed that leaders need to be role models; they must understand the unique role played by NHS staff. Komal Bajaj also stated that leaders can set the right conditions for quality improvement by modelling the actions and attitudes they hope to promote in others. Walk along with teams! On a similar note, Phil Meakin who said that leaders must practice what they preach.

This was further emphasised by Joanne Mohammed who said that senior leaders have to embrace and listen to staff who want to lead change and have the courage to let them try. Leeanne Lockley stated that as a QI regional programme manager she provides the staff with the skill set at the regional level and then support them to implement it in a local level.

The Side by Side Network said that there needs to be a safe space for staff to step outside of their job descriptions, be creative and have a co-production team. 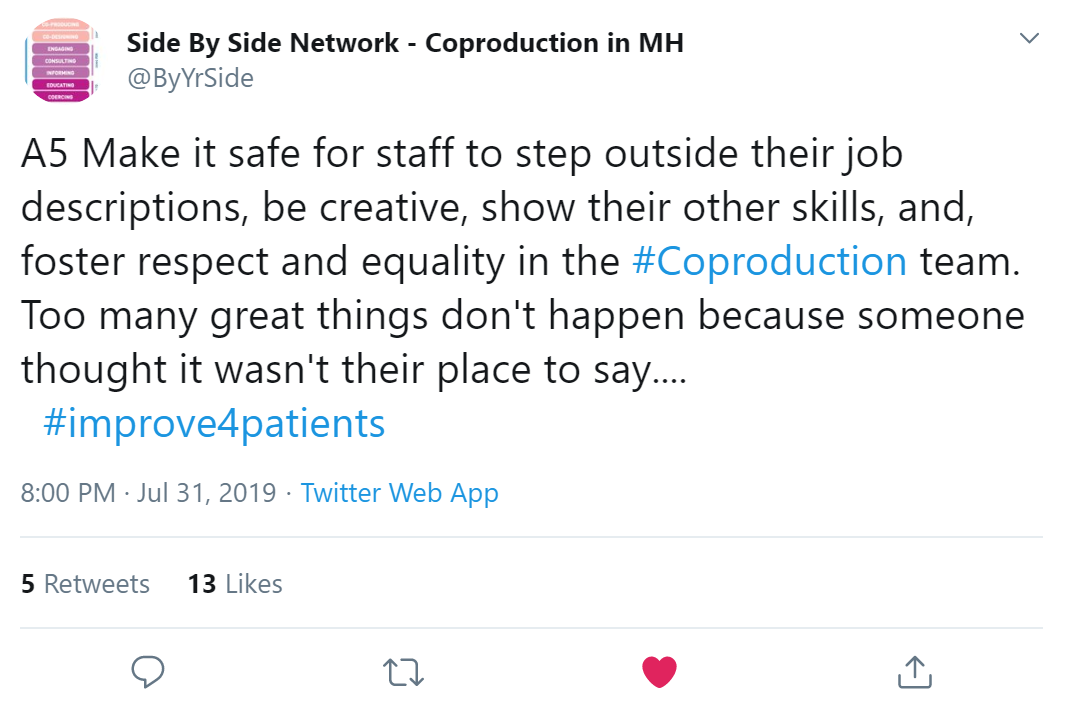 This was added to by Charlotte Jakab-Hall who emphasised that staff of ALL banding, levels and work should feel like they have the right and ability to be involved in the making of ideas and innovation for quality improvement.

At the end of the chat, we ran a poll to find out what people thought of all three tweet chats. A huge thank you to everyone who took part: we hope you found them as useful and insightful as we did. 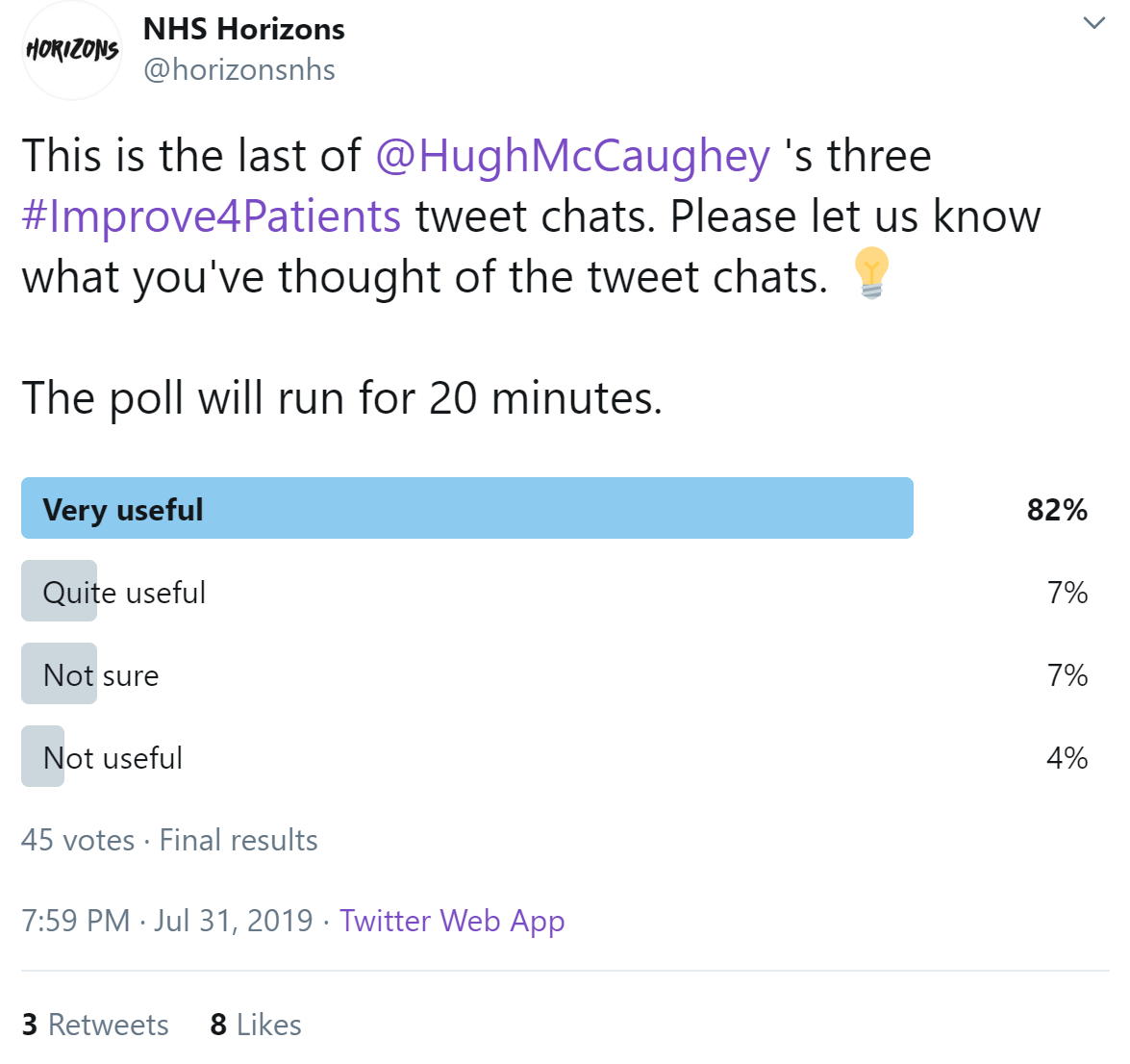 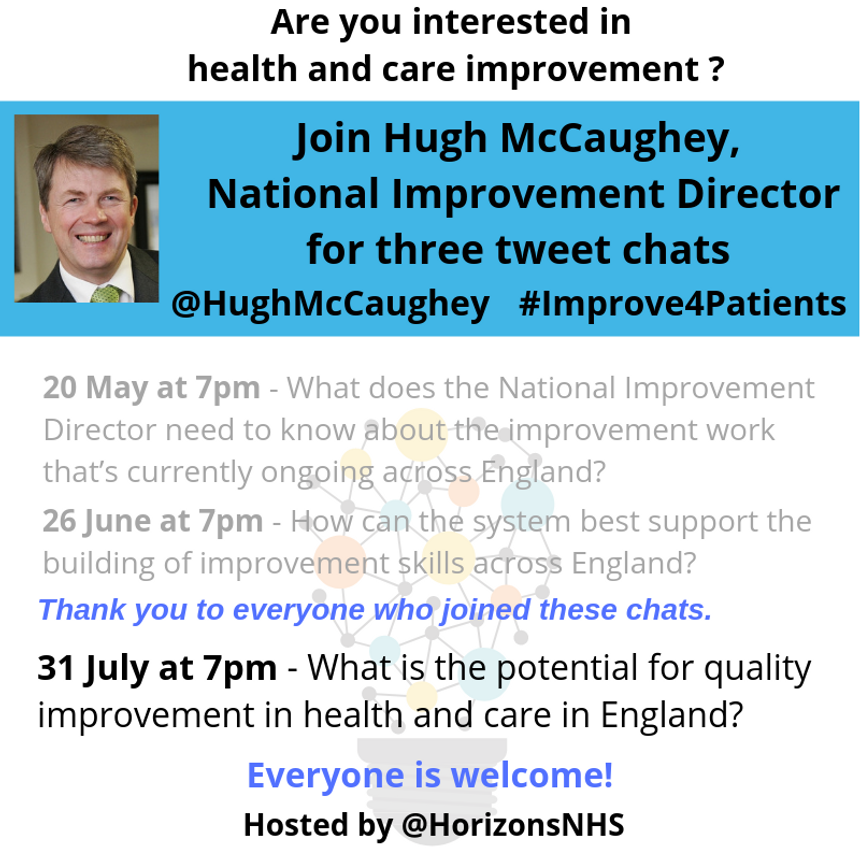